ELVIRA (VERA) SARACINO CARRERA Elvira (Vera) Saracino Carrera, 83, of Wilmington, NC passed away peacefully on January 14, 2019. Vera was born on July 20, 1935 in Brooklyn, NY to the late Joseph and Elisabetta Saracino. She was happily married for 56 years to the late Salvatore F. Carrera who passed away in 2013.

Vera began her career in New York City as a licensed beautician. After moving to Wilmington, Vera and Sal started their own wallpaper and window shade business. Vera later worked for Hoggard High School. Vera was a devout Catholic and, together with her husband, played an active role in St. Mark's Catholic Church. She was also a longtime member of the Elks Lodge. Vera was known by all as a fantastic cook, regularly making her own pizza and even sausage and pasta from scratch.

Her friends and family always considered her a great listener and sought her out for her balanced, insightful advice. Vera's inner strength and confidence was apparent throughout her life and particularly at the end.

A Mass of the Resurrection will be held at 10AM on Saturday January 26, 2019 at St. Mark's Catholic Church. Inurnment will be immediately following the Mass at St. Mark's Columbarium. 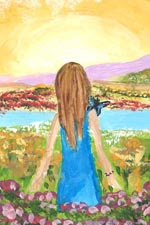 Atlanta Marie Carrera
HOW IT BEGAN... I first started painting for family and friends. My paintings are based on places we have been or things that are special to us. I enjoy painting because the possibilities are endless. My favorite way to paint is to create a scene by joining images from several photos I’ve taken. I love adding little details into my paintings that have a hidden meaning beyond the obvious. EXPLORING EMOTION... In combining my art with my poetry, I discovered a new way to explore emotions and merge them in my work. Blending together key elements into one painting is like piecing together a puzzle to express a story. My goal is to visually guide the reader to experience a deeper meaning. ART WITH A PURPOSE... By using my paintings and poetry for fund raising efforts, I have found a new purpose for my art. I call it “My Faith Journey.” My message is, “Follow your heart ...wherever it leads.” I love to hear stories of how my work has inspired others. My art website is http://www.AtlantasArt.com. Contact me at AtlantasArt@ec.rr.com.